Derry Down: Reverbs from the Past

Like Coda, the young musician in my book-in-progress, I grew up riding my bicycle around the many lakes, orange groves, and side roads in and around Winter Haven, Florida. If I wasn’t finding adventure reading books, I was pursuing it on my trusty 10-speed. Sometimes a spot would call to me – a stand of bamboo trees near Lake Buckeye, the forlorn looking old “haunted house” on Drexel Avenue, mansions on the outskirts of town – and I’d put down my kickstand and stare at the place with a story forming in my head.

We had our legends – from Dick Pope, the founder of Cypress Gardens to citrus magnate John A. Snively to a number of well-known musicians like Jim Stafford, Kent LaVoie aka Lobo, and Snively’s grandson, Gram Parsons, known by many as a key founder of the country rock genre of music. I had lots of fodder for story building. Later, when I grew up and became a newspaper reporter, I would write stories about some of these folks.

As a kid, sometimes I’d cut through downtown on my way to my older sister’s house off of Lake Howard, and I’d never fail to look at a small, nondescript structure perched off a street running along the old railway bed. Various businesses moved in and out of the place as my bicycle was replaced by a car, and my childhood friends gave way to a husband and children, and later still to newspaper colleagues and sources.

But the building remained as the decades passed and I wondered why I still felt drawn to it. A story lived inside that small, crumbling building. I could feel it!

I found out why in spring of 2014 when I was asked to write a magazine article about the renovation of the Derry Down, a listening room opened in 1964 by Bob Parsons so his stepson, Gram, and friends would have a place to perform. I interviewed Anita Strang, the director of Main Street Winter Haven, the organization restoring the landmark, and after our chat we walked two blocks from the coffee shop to the Derry Down – where I discovered, to my delight, the historical landmark was none other than the building that had captivated me for decades!

A month later I stood in front of the old Derry Down, listening to a group of legendary Winter Haven musicians – minus Parsons, who died in 1973, and an absent Lavoie. My eyes drifted around the scene watching several generations enjoying what Parsons had called Cosmic American Music. Old timers bobbed their heads and smiled with memories. Teenagers sporting nose rings and tattoos tapped their toes to songs dating back to the 1960s. Young parents danced with their toddlers and preschoolers. And I proudly stood next to my then 21-year-old son, who’d insisted we move from the grassy park area to space closer to the band.

Standing on the walkway into the Derry Down, my eyes kept roving the scene. I turned in slow motion and looked into the Derry Down. A chill shuddered through me. A spirit lived in that building, the spirit of music uniting different generations to celebrate the hopes and dreams of young musicians who played in the listening room five decades ago.
There was indeed a story in the Derry Down and I knew I had to write it. 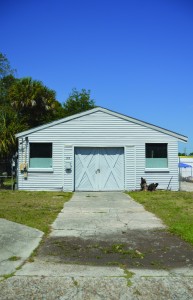 Many musical careers were launched in the Derry Down. The Spirit of Music still echoes in the old building. Photo by Jodi Foster of Foster’s Photography.