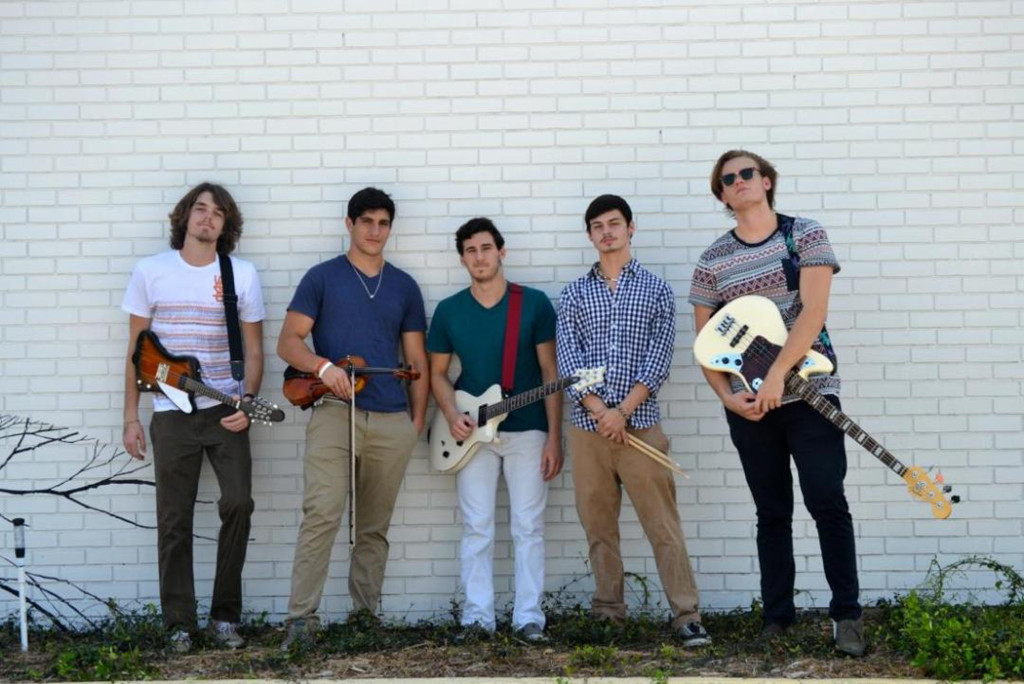 About a year and a half ago, I stood spellbound among a gathering crowd in my hometown’s Central Park as five young musicians played Bob Dylan’s “Wagon Wheel” under moonlight. I’ve been following their fledgling career path ever since. Along the way, they’ve shared with me their experiences, thoughts, concerns, and dreams as I’ve molded the character of Coda, the teenage musician in my book-in-process.

Let me introduce you to the talented young guys of Glass House Point (from left to right in photo) – Dylan Methot, mandolin/guitar; Noah Feldman, violin/piano; Dylan Graham, vocals/guitar; E.J. Miner, drums; and Ian Campbell, bass. Unfortunately, E.J. and Noah were unable to be at the interview.

D.K. – You’ve been busy since I met you at Winter Haven’s Pickin’ In The Park over a year ago.

Dylan G. – It’s when we started to take off and be popularized. If we’d not gone to Pickin’ in the Park, who knows where we’d be right now. It’s where we met (mentors) Toni (Brown) and Ed (Munson.)

Dylan M. – It’s when the stars aligned. From then on, things just started happening

D.K. – How has your life changed since appearing at the Gram Parsons’ Derry Down event in June 2014?

Dylan M. – Once we got the band started and once we were really committed, it gave my life a firm direction of the way I wanted to go down the musical path. For the last couple of years I’ve had a drive to keep going down that road because before that my options were kinda open and I could just do whatever. But having some sort of purpose is pretty cool. It motivates you, especially when you have a solid group of guys who are your best friends too.

D.K. – Last time we talked, all of you had different plans for the future. Where is each one of you at this point in time?

Dylan M. – I’m going to USF St. Pete. I’m going in undeclared pretty much just to weigh my options the first year and take the gen (general requirements) to get them out of the way. My plan A is the band and that’s why I’m in St. Pete, so I’m close enough so I can still practice and do shows with the band. I’m committed. I wanted to go to college so I know I definitely have a future and somewhere to go if things go awry. You can have a degree and still be in a band, especially in a place like St. Pete.

Dylan G. – In this industry, the way the progression works is so unknown. The way it unfolds isn’t the way you think it’s going to unfold. So I try not to figure out what my options are now. The one thing I do know is I love this band. I don’t know if it’s because I’m the singer or something, but I’ve kinda identified with Glass House Point to the point where it’s a part of me. So, it’s something I don’t want to leave behind. (Dylan G. is a high school senior.)

Ian – For the longest time it was like just playing music with my friends. We’ve all kind of found our bliss with the music and it’s kinda of like, personally for me, I want to keep it going too. Plan A, air quotes, is to be a rock star. Plan B is you know it’s still going to be through Glass House Point, but plan C, I’ll look at colleges, but it will have to do with music. (Ian is a high school senior.)

D.K. – How will it work with three of you still in high school while Dylan M. and E.J. are in college?

Dylan M. – It will be interesting. We’re so used to being with each other pretty much 24-7. Usually when we’re hanging out with people, it’s the guys in the band. I’ll be an hour commute away. I’m hoping I’ll be able to come back pretty consistently on the weekends. Hopefully, they can come over for shows in St. Pete.

D.K. – Now we get to what I’ve been dying to ask you about – the recording studio. Tell me a little bit about this project.

Dylan G. – After performing at the Polk Theatre, we knew we wanted to go into the studio to record some of our original stuff. Because I’d been recording our demos with some equipment I had in my home studio, we wanted the experience in the recording studio as sort of an ethos sort of deal, but also because we knew it was going to push us in a way we hadn’t been pushed before. So we came up with the money all by ourselves playing shows and working our butts off to get there. It’s been interesting for sure. It’s been a confidence booster. In a way now we’ve officially become recording artists. It was hours and hours of work. We’ve learned that a certain level of excellence can be achieved just by practicing our butts off.

Ian – For me, when we finished that last track it was kind of bittersweet. After all that hard work, all of the sudden it’s kind of like we’re leaving our old lives and starting a new chapter.

Dylan M. – It will be interesting to see how this new chapter unfolds.

Ian – I think what also really helped us find our sound was (recording engineer) Jonathan Gautier. He makes us feel like we’re honestly something special. I was having some trouble with some of the takes I had to do. I had to lay down some guitar parts that were ridiculously hard, incredibly tricky, and Jonathan was there to calm me down and make sure everything was all right. He was honest with me when the take was good. I feel like we’re something in there and that’s a good feeling.

D.K – So what I’m hearing you say is that in the time since I first met you in the park, people are taking you seriously.

Dylan G. – We have to prove that this isn’t just some phase, that we’re not just teenagers just trying to get girls playing music.

Dylan G. – There are some things we have to pan out. A lot more time and money go into this than most people think. We’re not about to cut this and then drop it in about a week. The recording will be available for purchase in November/December. We have a lot of promoting to do. With promoting comes thousands and thousands of more dollars we’ll need to raise and funnel into the band. We’re making steady money now. But this is something people don’t understand: Glass House Point is in fact as much of a business as it is a band. We’re all business owners and, as of right now, we work for free because 100 percent of our money goes directly into our music so we can continue to push ourselves forward.

D.K. – How has your music changed since you first formed the band in 2014? Originally you were described as an indie folk rock band. How accurate is that?

Dylan G. – Indie folk rock isn’t super accurate. But we all love folk music and when we first started playing folk music, it was more like folk rock music with contemporary influences.

Dylan M. – When we started off, I was heavily playing the mandolin. Slowly but surely I started getting a little more into electric guitar, a little more lead kind of stuff. It took some time because I was not that good when I started. But as our music has evolved, so have the instruments we are playing. I have an electric mandolin, now, and an electric guitar. That’s been a change.

Dylan G. – The violin replacing the banjo I think has been pivotal. The banjo automatically locks you into a particular genre. With the violin, you can be playing fiddle kind of things and you can stay a folk band, or you can get an electric violin and you can be playing hard rock. The possibilities are kind of endless. So we’ve been able to take that and apply it to a freestyle type of music and we haven’t been locked in by a genre.

DK – What is your most memorable performance and why?

Dylan M. – I think we can all agree that Playing It Forward at the Polk Theatre was the one. Beforehand, we practiced so much making sure the set would be really good. We had like a little party at my house before. We had a whole crew of people to come over to support us. We rolled up to the Polk Theater with my old raggedy van full of all of the music equipment and they opened the back door and unloaded all this stuff. It was a really cool treatment that day.

D.K – What have been your greatest challenges getting to this point?

Dylan M. – I think one big thing that could derail everyone’s progress is doubting yourself and your abilities. Toward the beginning, I would not even call myself a musician. It didn’t seem possible, but we kept working. If you can overcome doubt, then I feel like a lot can happen. I’ve just been telling myself, “Don’t doubt your abilities.” It’s easier to doubt yourself than say, “I can do this.”

Note: Musicians on the Move will be a monthly Q & A spotlighting emerging musicians who cross my path. Glass House Point will be featured in this blog from time to time because the guys have been an integral part in developing the characters of Coda and his friends in my upcoming book. My plan is to follow their career on the blog as my book tracks Coda’s development as a musician.