Musicians on the Move: The Truitts, Briana Tyson, and J.D. Wylkes Part 1 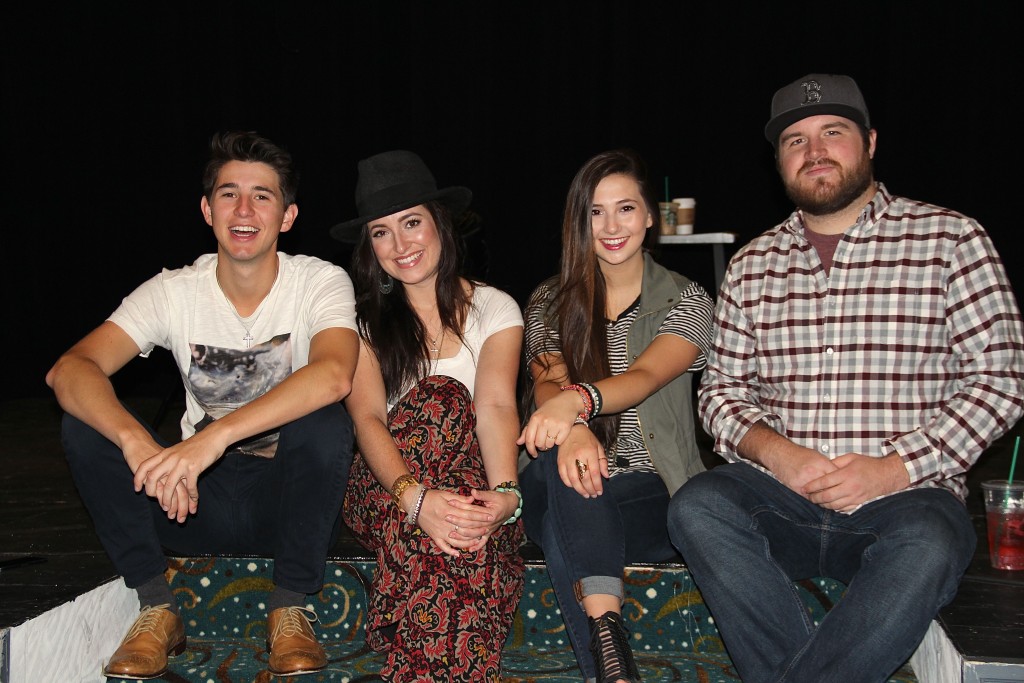 When siblings and singer-songwriters Brett and Brigetta Truitt – known professionally as pop/country duo The Truitts – arrived in Nashville nine months ago to pursue a music career, they didn’t know what to expect.

In a town the size of Nashville – about 601,000 people – especially one brimming with egos and ambitions across the music industry, it’s not always easy to get your bearings, much less find a friend.

But within a week they met American Idol alum Briana Tyson, 22, at a writer’s round and she quickly introduced them to J.D. Wylkes, a 26-year-old pop/rock/country artist. Although Tyson and Wylkes are artists in their own right, the friendship between the Truitts, Tyson and Wylkes has blossomed into co-writing songs, producing recordings and a tour they dubbed, “Rounds on the Road.” In addition to a common love of music, they all have supportive parents and a faith in God that sustain them.

D.K. – What path did you take to Nashville?

Brigetta – I started music when I was a little girl, and I did plays and musicals at Theatre Winter Haven. Then we started singing at charity events. We put together a duo and some songs. We’re both passionate about music and we were doing the more pop route.  (Note: Brigetta is 16 years old and takes classes through a virtual high school. Brett is 22.)

Briana – I’ve been singing since I was a baby. It’s been one of those things like a chain reaction with things happening. It’s long process. I’ve been doing this professionally for almost 13 years.

I’ve had some opportunities. I’ve opened for Vince Gill. I was on American Idol and made it to the Top 100 in the Scotty McCreery Season. (Season 10)

Trying to get things accomplished by a certain age has been difficult. It’s a process of writing and recording. Finally I’ve been signed with Emerge National.

It will be good to have a single out in the next couple of months. It’s called “Throw Back”.

J.D. – I’ve been singing since I was 13 years old. I wasn’t interested in music at all when I was younger; baseball was my thing.

One day my dad gave me for a Christmas present his old 1950 silver-tone guitar. My fingers literally started bleeding trying to learn how to play, but I loved it. I started playing at church later that year with him and I’ve done Christian music for about 10 years.

I was at a Christian school called Liberty University in Liberty, Virginia. I was leading the music for the university. I started listening to some of the secular artists I grew up with and started writing some of that again. That’s why I decided to move to Nashville.

I moved to Nashville about 2 ½ – 3 years ago. For the first year I didn’t do anything because I was scoping it out. I didn’t even know where to begin. I just played a lot of writer’s rounds and wrote a lot of songs.

D.K. – How is Nashville similar or different from what you expected?

Brigetta – Nashville is all about making connections – who you know, who you meet. It’s not necessarily about talent all of the time. We’re trying to show the best we can individually.

Brett – It’s a very overwhelming experience and it took a few months to settle in. You just have so much you have to do and so many people you need to meet. When you’re here (Auburndale) you go down to the Shake Shop and say “Hi” to your neighbors. There you go to an ice cream store and you go, “Hi, are you Gavin McGraw?”

Briana – You go to Nashville and you’re feeling I can do this and I like my songs better than this song on the radio, and you think it’s going to be easy. Then you realize it isn’t about what you think it’s about. Nashville can be very discouraging at times. There are people who are way better than you that never get to be successful and there are people who are nowhere as good as you that will have more success than you ever dreamed you could have. But music is one of those things where it chooses you. You don’t choose to do music. I don’t have a choice, it’s the only thing I can possibly do.

I have song that’s a story about an alcoholic father and a man come up to me after a show crying and saying, “My father was an alcoholic and thank you for sharing this story.” It’s those moments that make everything worth it. You forget about all of the things that happened, all the negative words, all the tears. All that matters is that you touched someone’s life. That’s what music is all about

D.K. – In what way had your friendship impacted your experience in Nashville?

Brigetta – We were kind of lost. Finding these guys was the best thing ever for us – not only did we find people who supported us as people, but they make us better people, better writers.

It’s humbling to know there are people out there who still stand their ground. To me it motivates me want to be the better person and not to fall into those kinds of temptations a lot of my kids might fall into. We want to be the Tim Tebow of Country Music and always be someone who glorifies God in all that you do.

We just want to make country music great. That’s a big goal, but with the right people, with God, with the support of family and friends, anything is possible.

Briana – I’ve been coming back and forth here for years and I’ve never found friends where it’s not like a competition. With all of us, if one of us gets brought up in a conversation, the other ones get brought up. We support each other because we care for each other.

Coming up in Part 2:

Brett, Brigetta, Briana, and J.D. discuss living and working in Nashville, their accomplishments and inspiration, and what’s up next for them.