Musicians on the Move: The Truitts, Briana Tyson, and J.D. Wylkes Part 2 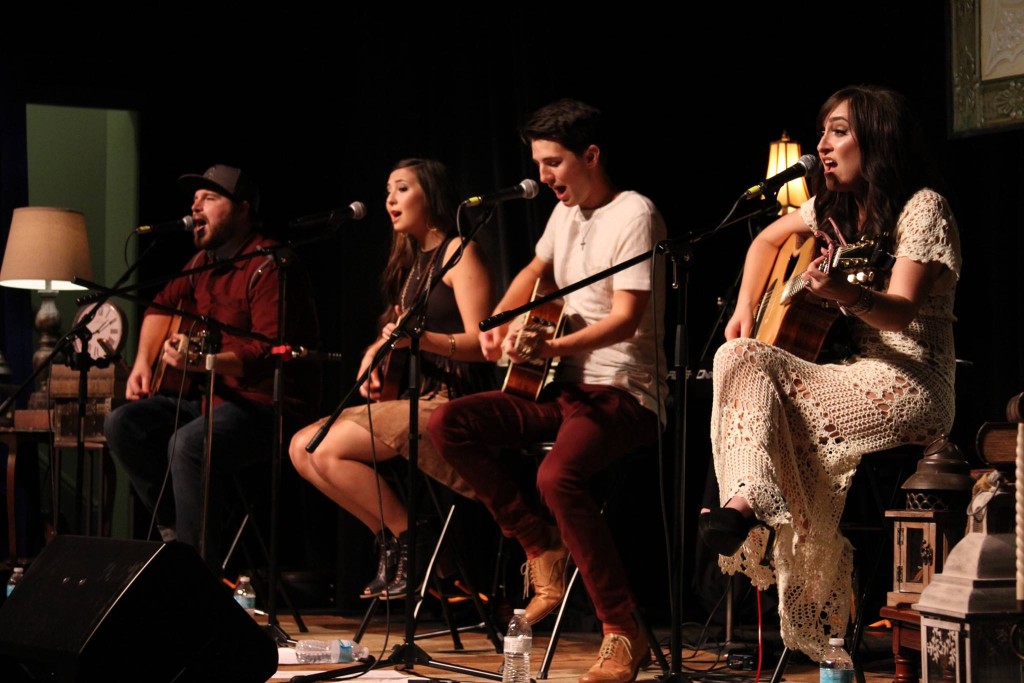 Following your passion often feels like taking an exhilarating leap off a cliff into a shimmering blue ocean, but the hang time brings a strange blend of joy and fear. The overriding emotion often depends upon what you find waiting in the water – hungry sharks or friendly dolphins. When siblings and singer-songwriters Brett and Brigetta Truitt moved to Nashville earlier this year, they were fortunate enough to find a mentor in award-winning songwriter Bobby Braddock, who grew up in the Truitt’s home town in Florida, and true friendship with artists Briana Tyson and J.D. Wylkes.

Together the four friends face the sharks in the music business while honing their craft, learning the ropes, and loving life.

This is part two of a two-part interview.

D.K. – How has living and working in Nashville affected you?

Brigetta – Nashville has challenged us a lot, has really shaped us. We’ve become better song writers just going to those writer’s rounds and hearing the people’s stories and the mindset they have.

Brett – There are a lot of massively talented people. It’s like if you’re in school, there’s the kid who makes the best grades and that’s the person who motivates you to be better. You can go out every night and see 40 of those people. It’s a community of song writers and musicians and we’re all challenging each other to be better because we all want those few spots.

D.K. – What is your biggest accomplishment to date?

Brigetta – Writing with Bobby Braddock. He would play the piano, think of something, and write it down. He’d say, “I got it” and walk to a corner. He’d start humming things and saying things, and come back and have a part of a verse. It was incredible. That experience of being in his writing room with all of his awards – it was such a cool experience.

Briana – Putting a CD out for “Moonshine.”

J.D. – I’d probably say when I led the music in my school when we were in the arena and there were 12,000 students in front of you. It was one of those moments like this is not anything I’ve experienced before. Standing on that stage and looking out at the crowd and connecting with them through the music. You can’t really forget something like that, your first time in a big venue.

D.K. – Who is your biggest musical inspiration?

Brigetta – The Jackson 5 is the reason I got into music. (She launches into her version of the Jackson 5 hit, “ABC”)

Bobby Braddock has been our biggest mentor in Nashville. We met him two years ago. He’s from Auburndale, our hometown. He took to us and has really helped us with our writing, our direction, and connecting us in Nashville. Bobby has really taught us about hard work. So many people come to Nashville and want the success, but they aren’t willing to put in the hours. All of us here, that’s what we thrive on: putting in the hours

Briana – I have several of them and oddly enough none of them are country. John Mayer is probably my favorite artist of all time. Celine Dion is one of my biggest influences. I’ve been listening to her ever since I was little. I’ve been obsessed with her music and I got to meet and sing with her.

J.D. – My dad’s been in a Beatles cover band since the 70s, so that’s what I grew up listening to my whole life. I still listen to the Beatles pretty much every day. Tom Petty is a big influence on my music. Clapton, love Clapton. I really don’t like any of the music today. I like those sounds from the 60s through the 80s. I want to bring back some of those rock or the pop sounds.

D.K. – How do you handle the Nashville challenges and music trends?

Brigetta – You look back but you don’t degrade a thing.

Brett – Nashville is a town of trend chasers. We want to be the trend setters.

Briana – Country music is not the way it used to be. It used to be about telling stories, almost a Christianity in songs. And it doesn’t any more. We want to bring back the respect and the story telling country music used to have. It’s going to come around to what we’re doing at some point, we just have to keep doing what we do and wait for that time to come.

Note: The Truitt’s, Briana Tyson, and J.D. Wylkes completed the first leg of the Rounds on the Road Tour in Florida. They will resume the tour in January 2016. They’re analyzing comments on social media to determine where they will perform, although Cleveland, Ohio is on the list.

During a songwriter round, songwriters sit casually on stage, play songs, and tell stories or discuss the lyrics between them.

Brett – It’s like bringing a little slice of Nashville to everyone else.

J.D. – We’ve got a lot of new songs for this new CD called Rounds on the Road. It’s a lot of songs we haven’t released. It has a few songs we’ve pitched to other artists. That’s kind of a hard thing about where we are as songwriters – we have to try to figure out if this is going to be my song that you finish or am I going to take this song and pitch it to other artists? Can we release it yet or do we have to hold back and see if anyone else is going to release it? We’re kind of in this very awkward moment.

But we’re kind of figuring it out song by song, which is really cool.